The “Feel Good” hit of the Spring!

On Saturday, April 27, 2019 “Rockin’ The Secrets of Plymouth Rock” premiered at the historic Mayflower Society House in America’s Hometown Plymouth, MA, just up the hill from Plymouth Rock. April showers usually bring May flowers and the morning it started out that way but the afternoon rain held off to the delight of author Diane Finn, illustrator Erin Finn Zell and composer Candido Bretto. Mrs. Finn narrated the rock’s story and Mr. Bretto’s music seamlessly weaved its way in and out with uptempo numbers like “Fine Day” and “Madame Crab“.

A talking rock? Surely you jest.

No joke its true! In fact it sings too. 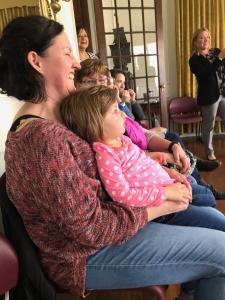 And this summer when the rock sings it will sound like 28 Plymouth children’s voices as we’re creating a music cd featuring their voices this and next Saturday.

It was a small gathering at the Mayflower Society House but they had fun! They tapped their feet and clapped their hands to the Caribbean beat of Mr. Seagull, the lilt of “Sights and Sounds of the Sea“, the rhythm of “Ouch Stop That“, and the beat of “Protect This Rock” and 9 more as Finn spoke and Bretto sang. The children in the audience were mesmerized as Candido was his usual animated self. Together he and Diane are on a mission to delight the hearts of children worldwide with a special rock’s story of innovation, exploration, survival and thanksgiving. “The Secrets of Plymouth Rock” is set to become a classic on the list of Early American based children’s music. 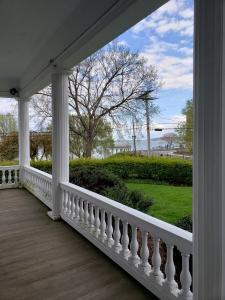 The author told (from “the rock’s” perspective)

of the “Landing of the Pilgrims” in 1620 as well as the some of the activities of the colonists up until 1920. The rock recalled how special it felt the day in 1920 it was given a “New and Wonderful Home“. You can see Plymouth Rock from the porch in the photo.”

“It felt very special to

sing those songs in that historic place knowing what it represents. They were a joy to write and I am happy to be able to share Plymouth Rock’s story with the world in this way.”